Toddler Won’t Eat Without TV or iPad? Here’s How We Cut Out Screen Time During Meals 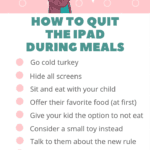 Our two year old son used to eat only while watching cartoons on the iPad, TV, or the phone. We tolerated this for a long time, but then decided to cut out screen time during meals cold turkey. It worked! But with some caveats. Here’s how we did it, why it worked, and what we tried first (unsuccessfully). 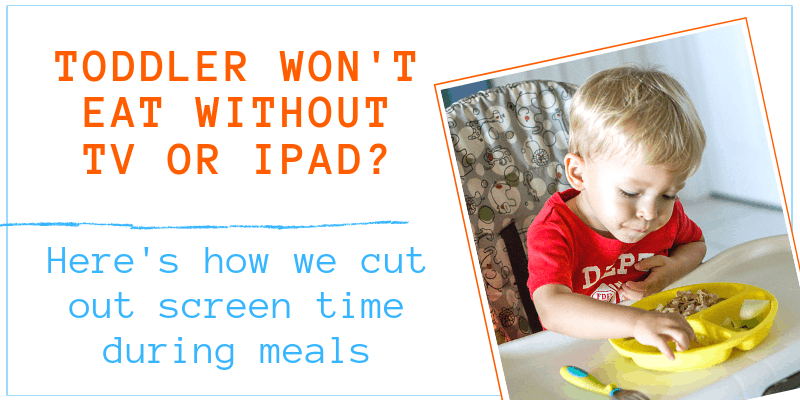 If you’re new here, this blog is about my toddler son who’s had a lot of issues with eating. He has had issues with gagging while eating, hating his high chair, food throwing, and just general toddler pickiness that resulted him in not eating and losing weight. Some of this probably sounds familiar to you, my son is not a special snowflake.

When our son was around 10 months old, we realized that we can put on Elmo on YouTube which would keep him sitting in his high chair long enough to eat (I am surprised it took us this long!). He would be entertained and wouldn’t throw food or cry to get out of his high chair, plus the screen provided enough distraction that he was willing to actually eat food without getting stressed out over it.

We figured, we’ll just use the iPad or TV during meals only when we really need him to eat, and just for a month or two until he learns to eat better. He was really underweight at that age, and we just needed him to eat.

Besides, we started putting on Sesame Street, Elmo’s World, and other educational shows that would start teaching him colors, numbers, letters. That’s not so bad, right? At least that’s what we told ourselves.

Soon our son was totally dependent on watching the iPad while eating and started asking for Elmo as soon as he sat down in the high chair. He refused to eat without it and would get really upset. We had created our very own Sesame Street monster. We knew we had to do something about it.

There were many reasons we wanted to get our kid to eat without screen time:

Now please note, we are not complete sticklers for rules. Once in a while we do put on TV for my son (Mr. Rogers’ Neighborhood! Who else loves Mr Rogers??) when we need him to sit still for whatever reason. I don’t judge anyone for doing that. But we figured we should at least cut down on screen time during meals to reduce the amount of TV he watches.

If you’re struggling getting your child to eat because of sensory or texture issues, check out 52 weeks of Sensory. It’s a year-long list of sensory activities I created with a focus on picky eaters. Join me for lots of fun sensory play! Learn more.

How to get a toddler to eat without the iPad:

There are a few approaches you can take to stop your toddler from watching TV or the iPad while eating:

Do nothing and hope they grow out of it in a few years when they learn to enjoy food and learn to eat faster, so meal times are not a chore. In the meantime, of course, you can model good behavior by not watching TV on the big screen during family dinners and not being on the phone or iPad yourself while eating.

The downside to this is that, well, you’re not really cutting out screen time. And what if it’s 5 years down the road and nothing has changed?

By the way, I totally get doing nothing. I am not judging. Feeding kids is hard and can be very stressful, especially if they have any picky eating issues or are underweight. We did nothing for almost a year because we just needed our son to gain a little weight and get out from being <1% on the growth chart.

You can do this by starting meals without the iPad/tablet and prolonging the amount of screen-free time before you have to whip out the cartoons.

The downside to this is that your kid knows that the iPad is coming, so they will just keep asking for it, or they might even have a complete meltdown.

We tried this approach a few times. We’ve had a few nice meals where my son ate most of his food before realizing that he can ask for the iPad. But overall, this approach didn’t work for us.

This is the approach that finally worked for us. But it wasn’t so simple. We had to wait until our son was almost two years old, started eating better, and was old enough to understand some things.

When he was 23 months old he started eating a bit better (thanks to feeding therapy!) and gained a little weight, enough to be in the 5th percentile (whoo!). He was eating 1-2 meals a day, even eating vegetables, and we were not as desperate for him to eat something, anything, any way possible.

So we sat him down, held his hand and gently patted him on the back, and spoke at a 2 year old level:

No more Elmo. Sorry, love. We do not watch Elmo. You don’t have to eat. It’s OK, you can be “all done” but no more Elmo.

We did this consistently for about 3 days while he still asked for Elmo. Some days he got upset and we let him get out of his high chair. Some days he whined and mumbled but then sat and ate some food. But after a couple of days he seemed to forget.

I should add that sometimes we ended up feeding our son while he was playing in the living room. No, it’s not a great way for a kid to eat either. But it helped with the transition from the iPad and still got a few meals per day into him. We are moving away from that and just bringing small toys to the table now. I am OK with this for now. It’s a HUGE improvement over my son being totally zombied out staring at a screen and refusing to eat without Elmo.

When to break the rules

I am proud to say that our son has not watched ANY TV at home in 3 months now. Again, not because we are super strict, but just because we were able to completely stop watching TV during meals, and he has lots of toys to entertain him outside of meal times.

BUT, when we go out to dinner, or when we are traveling and we need my son to eat, we always put on cartoons on the phone. It’s literally the only way our son stays put in his chair, otherwise we have to run around the restaurant after him. And that is just not something we want to do while we are on vacation or when we want to enjoy a meal out. Hey, mama needs a break too.

The cool thing is that when we get back home, our son never asks for the iPad or phone. It’s just a different environment than being on vacation, so he doesn’t think to ask for it when he is home. This is another reason to try to get your toddler to eat without the iPad earlier on. I am sure if he was a little older he would figure out that he can ask for the iPad at home if he just used it while on vacation.

The other time we break the rules is when my son is sick and is literally not eating anything. Then we would bring a plate of his favorite food out to the coffee table and put on TV so he can sit and eat. We don’t bring the iPad to the table in this case, because we don’t want him remembering that this is how we used to do things. We try to bring the food to a new environment.

But aside from these few exceptions, I am happy to say that we taught our toddler to eat without TV or the iPad, and it has been awesome. We’ve been able to actually enjoy family meals together, and our son is now eating much better than when he was distracted by the screen.

So what do you think? Do you think this would work for your child? Are you scared to even try? Let me know your thoughts below! And don’t forget to share this on Facebook or Pinterest if you think this could be helpful for other parents. 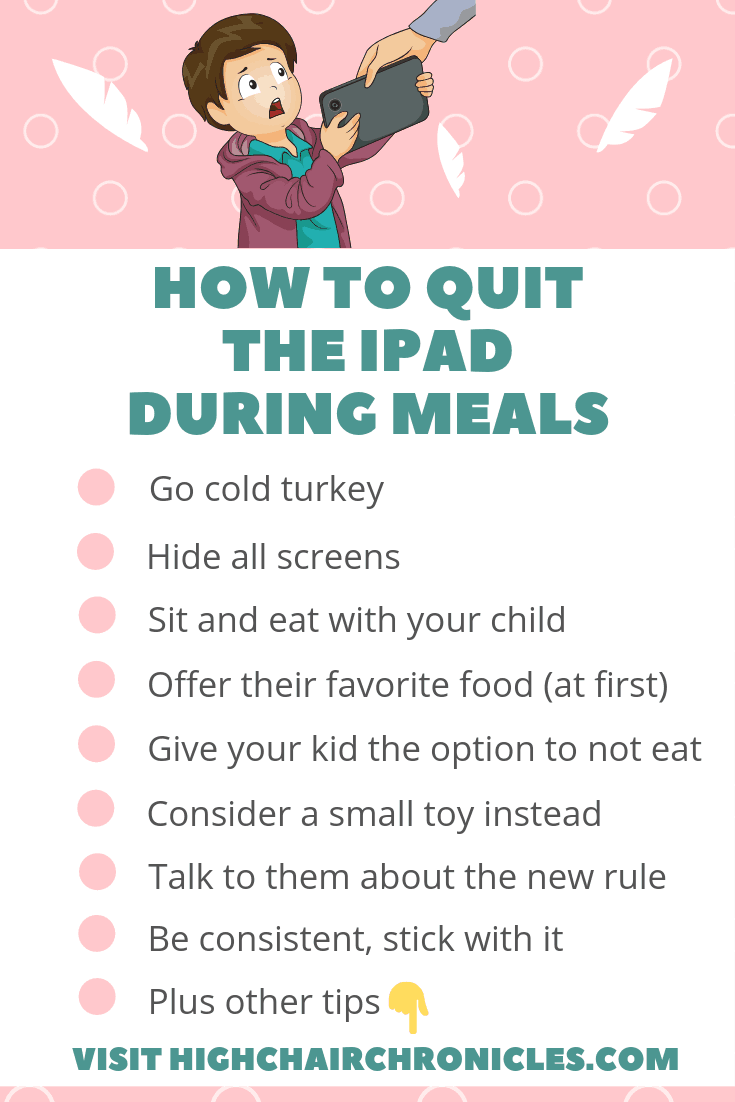 Kate is a first time mom to Elliot. She LOVES food and even has a food blog in addition to this blog, so her son's picky eating definitely took her by surprise. Before having her son, she loved rock climbing, traveling, and yoga. Now she just wants to nap. 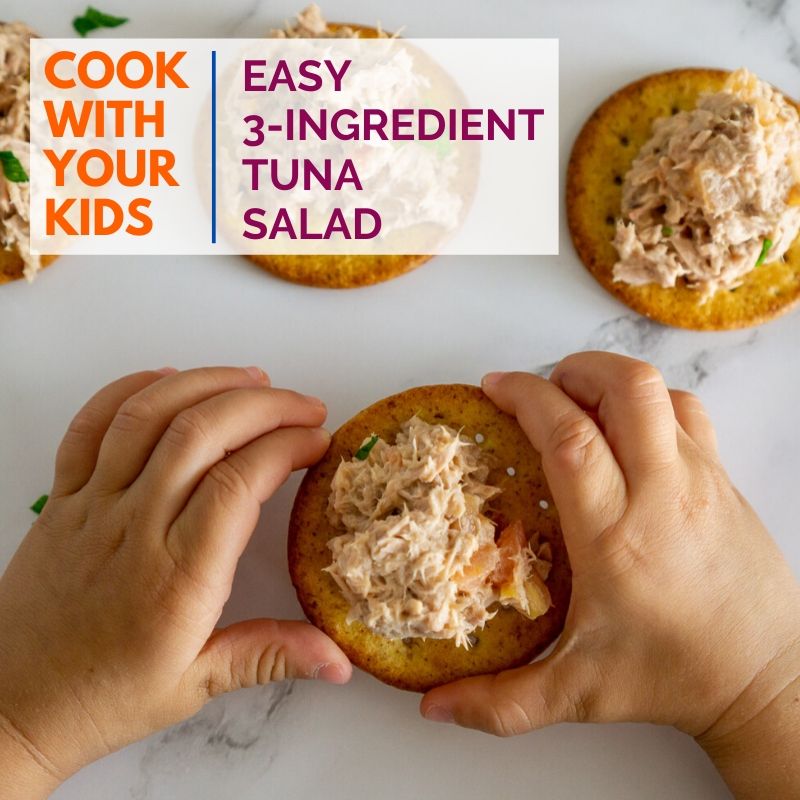 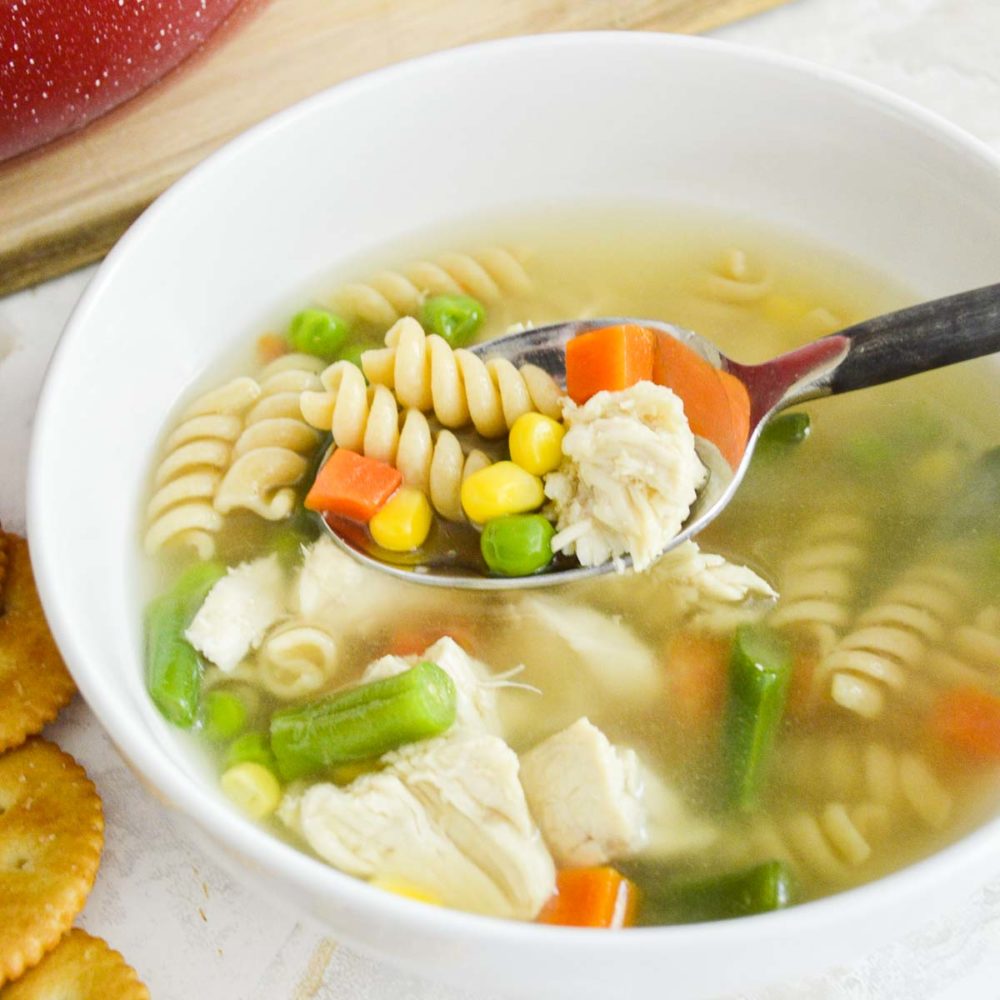 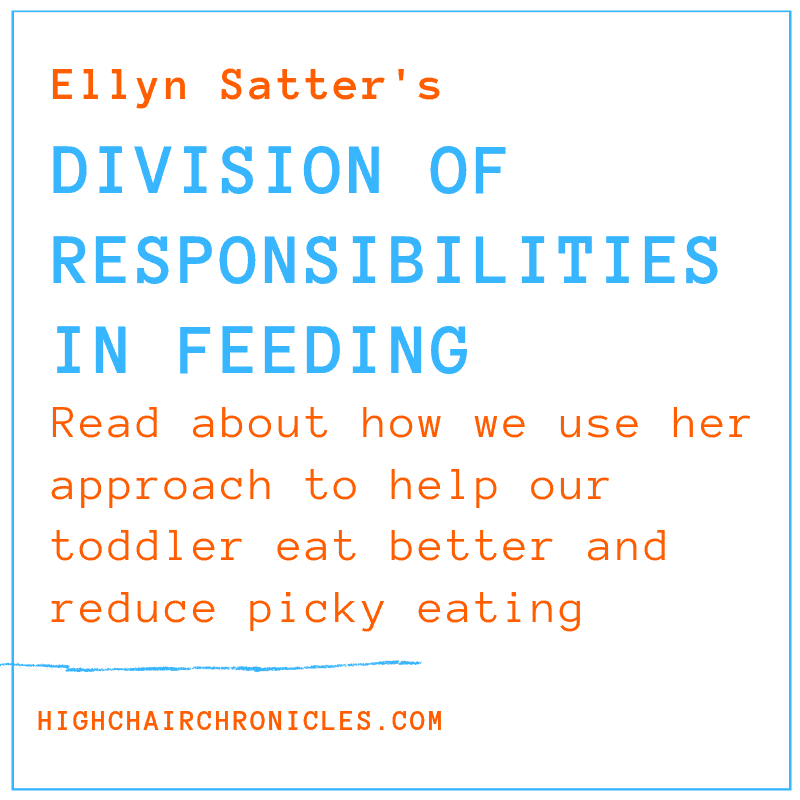 Division of Responsibilities in Feeding Your Toddler

Welcome to High Chair Chronicles, where parents of toddlers find practical tips for picky eating, sensory issues, and food aversion and transform mealtimes from stressful experiences into enjoyable family meals. Start by reading our story or head on over to the toddler meals archives for practical advice about picky eating. Remember, you are not alone in this struggle!

11 Easy Toddler Activities to Tire Them Out